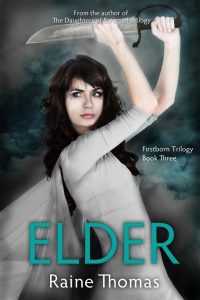 Clara Kate is one of the eight beings needed to activate the Elder Scroll, an ancient artifact causing tragedy and darkness on the Estilorian plane. She knows that her focus needs to be on finding the final piece and stopping the evil Mercesti, but Ini-herit isn’t making it easy.

He’s working closely with Clara Kate on the quest to stop their enemies…too close for her comfort. His presence serves as a constant reminder of the love they shared on the human plane, a love that he no longer remembers at all.

Her life and the lives of those she loves are at risk, and she knows she has to put aside her personal problems. So far on their journey, she’s endured heartbreak, terror, pain and loss. She’s even been brought to the brink of death.

She thinks things can’t get any worse.

“Raine Thomas…is an incredible author who has breathed life into the sometimes redundant genre of Young Adult literature.”
“The suspense is fantastic, the plot twists wild and beautifully unpredictable, and the world building near perfection…”
“The Firstborn trilogy is fantasy done right.”

“Let me get this straight. Your dad is Gabriel? As in, the Gabriel mentioned in the Bible?”

“And he and I were once the equivalent of best friends?”

Clara Kate stifled a laugh as she watched Ini-herit process this news. His gray eyes were wider than she’d ever seen them. The only sound was of the rain pelting the roof of the large tree house located in the backyard of their human guardian, Mrs. Clara Burke. Despite the fact that they were eighteen and the tree house was meant for younger kids, it was a place they visited whenever they wanted some time away from everything else. They’d even camped in it a few times.

Now, they sat against one wall with their legs sprawled in front of them and their hands joined. He studied her for a moment. When she just quirked an eyebrow, he let out a long breath.

Her lips curved upwards. “You believe me.”

He continued to look at her without responding. She knew his features as well as her own after these past few months with him on the human plane, but that didn’t make her less interested in gazing at them. His aristocratic nose, long-lashed eyes and full lips would have made him what others called a “pretty boy” if not for the rough, honed edges of his cheekbones and jaw line. He wore his dark hair longer than Mrs. B would have liked, but he usually pulled it back into a ponytail out of deference to her. At the moment, he had it unbound and it brushed his shoulders in beautiful waves.

“I do believe you,” he said at last. “Though heaven knows why.”

“Well, you’re the Corgloresti elder. It’s a class founded on faith. Even though your Estilorian memories and abilities have been suppressed while you re-learn human emotions, you retained your core characteristics.”

“So when I call you Angel, it’s not so much a nickname as a fact.”

Shaking her head, she nudged him with her elbow. “I told you we’re Estilorians, not angels.”

“Oh, you’re no angel,” she said. He grinned wickedly, making her heart work overtime. “Angels are just one of the mythical creatures humans created based on their memories of Estilorians. When we separated the planes a couple of thousand years ago, humans documented their experiences with us in a variety of ways. Art, literature, music…you name it. In essence, we became human myths and legends.”

“Being a legend doesn’t sound so bad.” He paused, looking thoughtful. Then he asked, “And I’m how old?”

“Well, you were around before the separation of the planes.”

“It’s true,” she said, laughing at his expression. “On the Estilorian plane, you’ll look about the same age you are now, though. Maybe a few years older. Estilorians don’t age, and many of the elders are the youngest in appearance.”

“You said I’ll look different when we transition. How different?”

She was pleased by his apparent acceptance of what she’d shared with him. They had been discussing this for hours, ever since she received word that they had to return to the Estilorian plane. She knew she wouldn’t be commanded back unless something big had happened. Maybe her mother had gone into premature labor or something. Whatever the reason, she couldn’t refuse the command.

“I don’t know,” she responded. “We don’t have photographs on the Estilorian plane, and you left before I was born. I’ve never seen your Estilorian form.”

“Why? Do you think you’ll end up looking like Brent?” She batted her eyelashes at him.

He shoved her shoulder. “Ha. You can have that blond Viking with the IQ of a sock puppet. Who needs enough muscles to lift a car, anyway?”

He rolled his eyes and swung an arm over her shoulders. She felt the taut muscles there and knew he didn’t really have a complex about Brent’s steroid-induced physique. It was Brent’s unwanted attention toward Clara Kate that had brought her and Ini-herit closer together, so he was a frequent butt of their jokes.

“But you’ll look the same?” he asked.

“Yes,” she said. She’d already discussed this, but didn’t mind reviewing it if it helped ease his worry. “I’ve been able to transition between the planes without changing forms since I was three. I’m the only Estilorian who can, actually. No one knows why.”

She didn’t bother describing the uproar she’d caused the first time she did it. She barely remembered the experience. One moment she’d been sleeping in her bed at home. The next she was in a hospital on the human plane answering a million questions from the humans who found her. As a result of her impromptu transition, the protections around her homeland had been strengthened considerably.

“You’ll look similar to how you do as a human,” she explained. “Archigos Zayna, the Scultresti elder, did her best to mimic your Estilorian features in your human form to make the transition less psychologically stressful on you. Your eyes will be more silver than gray, and you’ll have a bunch of silver markings on your body from past pairings with Gloresti. And I think your hair will be longer, based on what I’ve heard.”

“Based on what you’ve heard?” he repeated. He reached over and traced the line of her jaw, causing her to shiver. “You were curious about me before you ever came here, weren’t you?”

“Yes,” she said breathlessly. His touch always did this to her. “I couldn’t wait to meet you.”

“And now that you have?”