I’m so excited to celebrate the release of A Heart So Cold today! This is the third of my Atlanta Siege hockey romances. I truly fell in love with Vivian and Luke’s story. They were such fun characters to write! Several of my amazing beta readers said this story is their favorite in the series so far, which makes me SO happy!

If you’re not following me anywhere on social media and you’re not a newsletter subscriber, you might not have heard about A Heart So Cold. Be sure to check out the blurb below! 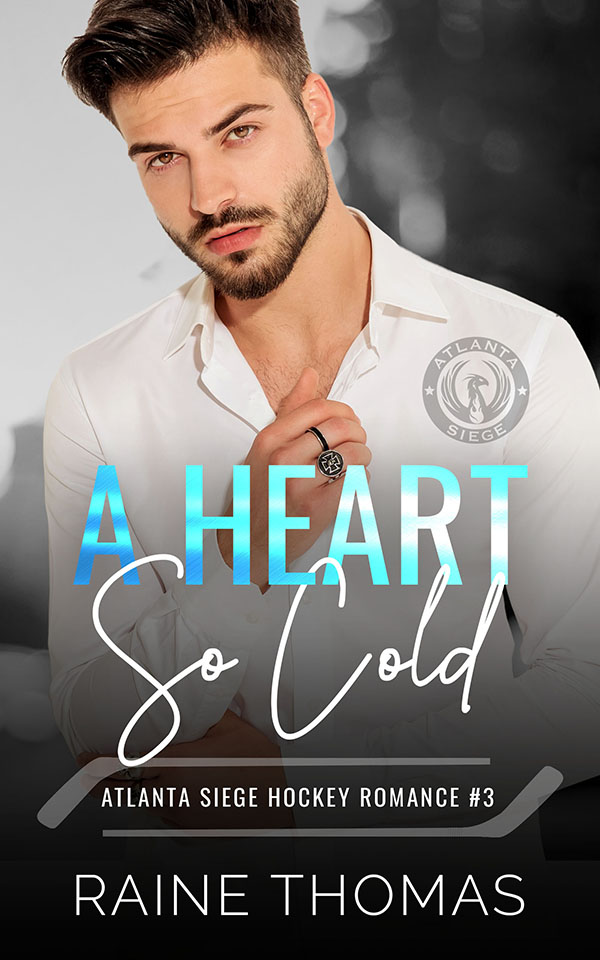 He’s a seasoned NHL veteran, a committed lifelong bachelor, and the newly named captain of the Atlanta Siege.

Luke Landry might not have expected to inherit The Siege’s captaincy, but now that he has, he’s vowed to give it his all. Of course, that was before he knew he’d have to work so closely with the team’s Director of Public Relations, a woman as formidable as they come.

Luke’s teammates see this as an opportunity too good to pass up. They’re sure that with a little … persuasion, the hard-nosed director will finally loosen up, and he’s just the guy for the job.

Looks like if he wants to earn their respect along with his new title, he’s going to have to take one for the team.

She’s known as The Queen of PR, The Ice Queen, and—her personal favorite—The Ball Breaker. And she wouldn’t have it any other way.

Vivian Price has made an excellent living out of keeping the players of the Atlanta Siege in line, and she’s not about to let the team’s rugged new captain change that. She might need his support to keep the players marching to her tune, but she’s not about to go easy on him, no matter how much charm he tosses her way.

Rules are meant to be followed, and her number one rule? No dating players.

It starts as a battle of wills between two ambitious co-workers. How it all ends will depend on who gives in to their undeniable attraction first.

Interested in grabbing your copy of A Heart So Cold? The link below is a universal book link. If your preferred book retailer isn’t available via this link, let me know and I’ll find another way to get you a copy. :)

BUY A HEART SO COLD NOW

Thanks so much for taking the time to learn more about A Heart So Cold! I hope you’ll check it out and let me know what you think of Vivian and Luke’s story.

If you’re one of my newsletter subscribers, you know what to do. ;) If you’re not, be sure to sign up on my home page so you can get the inside scoop–and free books!